WizardCraft Colonies is a top-down colony simulator for PC, the players main aim is to keep their colony alive while expanding your base.

When you build a base in WizardCraft Colonies you will need to take all of your villagers needs into consideration. You will have to make sure they have a bed to sleep in, furniture to keep them happy and plenty of food and water so they will have enough stamina to keep on working.

To build a base you will need plenty of resources, these can either be gathered from around the map or purchased from the market. As your base expands you will be attacked by monsters, to protect your villagers, you can build walls, doors and magical towers which will fire magical spells at any monster which wanders too close to your base. There are currently more than 80 different monsters in the game.

To keep your villagers fed you can grow crops, fruit bushes, and fruit trees. These will have to by kept watered and fertilized for optimal growth. Additionally certain crops will only grow  during certain seasons. Winter can be an tough season for crops, but its possible to grow them under glass houses or build some heaters nearby to keep the frost away.

Another way to feed your peasants is by raising cattle. When cattle matures, they can be slaughtered for meat, milked or they will lay eggs. Cattle will also mate and produce offspring which can be a good source of coin when sold at the market.

Some of the critters (birds, squirrels and rabbits) in WizardCraft Colonies may eat your crops or raid your stockpiles for food. To keep them under control you can have pets around your base. Pets can be named and you must meet their basic needs by feeding them and giving them water and somewhere to sleep.

To further defend your base, your villagers can equip weapons and fight. If a villager picks up a sword he will become a knight, an archer if they have a bow or a wizard if they pick up a staff. Weapons in WizardCraft Colonies can be equipped and unequipped at any time.

It is possible for your colony to have children, who will grow up and work in your base. Additionally villagers will also get old and die as time passes by. Villagers will pass on their experience to any children they may have. For example, a level 20 and a level 10 peasant will produce a level 15 baby.

The player can micro-manage everything a villager does in WizardCraft colonies, from the time of day it sleeps and works, to what potions and weapons they should carry. It's also possible to set which different jobs each of the villagers should do. Additionally the player can control under what conditions a villager should preform a certain act, for e.g if health is below 40% use a health potion, or if hunger is below 30% eat some food.

To expand your base you will need plenty of coin. There are many ways to earn coin, you could either sell gathered resources, or sell crops and fruit or raise cattle. In addition your villagers will pay a daily tax. You can also manually control any villager, equip a weapon, and then visit new lands to defeat monsters and gather coins and chests.

The price of resources is determined by how rare it is in the map, if you buy a lot of a certain resource at the market its buying price will increase.

WizardCraft Colonies has a lot of depth, here are a few more features of the game:

There are currently 4 different biomes each with their own survival difficulties, Grasslands, Swamp, Desert and Volcanic. In desert regions water is scarce while in volcanic regions you must keep your villagers cool due to hot temperatures. When you start a new map in WizardCraft Colonies it is randomly generated and split into 9 different regions which each have their own level caps and monsters.

why only get demo 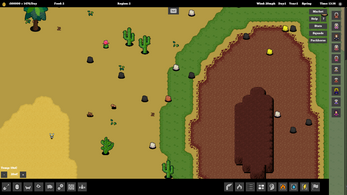 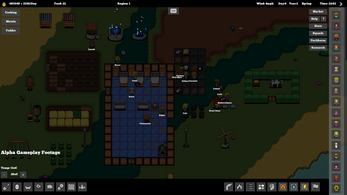 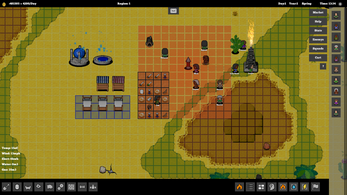